It’s well known that clearly fitness is one of the most essential things in your life, it helps your body stay healthy along with making it more tolerable to outside interference but it’s more than that. Believe it or not, there are some more subtle things as well. So, this is a list of some lesser-known facts about fitness.

Although fitness helps the physical parts of your body, it can actually help with increased brain power. Moving around and doing exercise releases serotonin into the brain. It also increases energy levels meaning that your brain can process information faster.

Endorphins are let into your body when you exercise, so it’s actually best to go for a run before work. Running will allow you feel much more energized, and you won’t feel exhausted at work. Tiredness happens after you do any sort of fitness exercise however shortly afterwards you will get a burst of energy.

Believe it or not being out and about can actually help with fighting off diseases you may have. It may even help ward off High Blood pressure, type 2 diabetes, strokes, high cholesterol and even arthritis. This is great especially for those who are a bit older and are more prone to getting diseases as it isn’t easy to just find ways to ward them off as you may expect.

If you are doing a fitness regime and it is at least 7 hours of exercise a week you are approximately going to be 40% less likely to die earlier than others. Now it is well known that the health benefits can help you live longer but the 40% is actually a huge number when you think about it. 40% is a higher chance of living a long and happy life which in the end is worth it after all it’s only 1 hour a day which isn’t really that much in the long run.

Some people wonder why they don’t sleep well at night, now it can be because of insomnia. However, chances are that there is a possibility that it is due to the energy you build up. Sleep is usually used for your body to recover, think of it as a service for a car but if a car doesn’t go anywhere, then its services become few and far between. Trying to sleep full of energy just means you won’t be tired and it can really have an impact on your sleeping pattern.

One of the reasons people don’t exercise often is because they think they don’t have the time for it. Turns out however that you really do, even 10mins of exercise can help with your heart rate and help with keeping a regime. 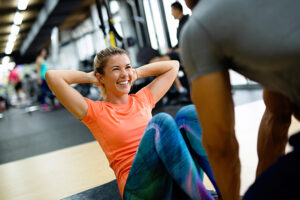